BOLIVAR, Tenn. — One local rescue dog has a new place to call his forever home.

Mercury was surrendered by his family to the Hardeman Adoptable Animals shelter and has been waiting to find a new home. 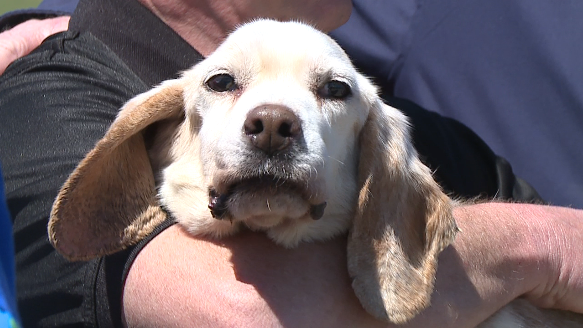 “He was surrendered, was allegedly chasing chickens, and obviously from him walking you can tell he wasn’t chasing chickens, so we named him Mercury,” Hardeman County Animal Control Officer Bill Richardson said. “Kind of a play on words — he’s not the quickest thing.”

Because of Mercury’s age and possible health conditions, Sandy Wayne Sanctuary of Hope outside of Tuscaloosa, Alabama, volunteered to take Mercury to a special home for dogs like him. Richardson made it his mission to make sure he was able to have a happy ending.

“So many of the dogs like him would be put down almost immediately coming into a shelter, and I just made the decision Sunday. I said no, it’s not going to happen here,” Richardson said.

This isn’t the first time the Hardeman Adoptable Animals shelter has gone this far to find homes for the animals. Every few weeks, they transport animals to shelters in Chicago and work with other shelters across the country.

“Hardeman Adoptable Animals deals with a group called Minnesota Paws and Safe Haven out of Chicago, both excellent organizations,” Richardson said. “I bring a lot of rescue contact from my previous experience with Paws New England and Peace for Paws out of New Jersey.”

The shelter depends a lot on donations from the community and help from volunteers. Right now they are in the process of moving into a new location by year’s end.

“Those are our greatest needs right now is the fosters and the donations to Hardeman Adoptable Animals so that we can raise the roof on this new shelter,” Richardson said.

The Hardeman Adoptable Animals shelter hopes to bring happy endings to all their shelter animals, just like Mercury.

If you would like to adopt, donate or just see how you can help, visit the Seen on 7 section of our website.