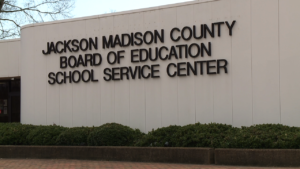 “The administration and legislature has heard the concerns and I think that’s part of how this gets changed,” said Madison County Representative Chris Todd.

“We were all expressing our disappointment that education saving account vouchers are progressing as they are and the damage that they might tend to do,” said JMCSS school board member Wayne Arnold.

A day after the school board met with Governor Lee, Jackson-Madison county was removed as a school system who would be affected by the voucher bill.

While Jackson-Madison county is no longer on the bill, Rep. Todd says nothing is set in stone.

“We still are a little ways off from having a final bill to vote on,” said Rep. Todd.

On Monday, the Jackson-Madison County Education Association will be holding a vigil for the vouchers.
They will be releasing balloons and encourage everyone to dress in black.