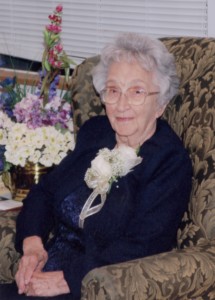 Cleo Iva Douglass McNabb, age 100, wife of the late Charles McNabb, departed this life on Saturday morning, May 4, 2019 while staying with her daughter in Clinton, Mississippi.

Cleo was born July 18, 1918 in Fayette County, Tennessee, the daughter of the late James Alvis Douglass and the late Iva Cole Douglass. She attended Warren Elementary School, was a member of Oak Grove United Methodist Church and attended Lambert Community Church, all in Fayette County. She was married February 8, 1940 to Charles McNabb and helped her husband on the farm until she started working at Somerville Manufacturing (Salant & Salant) when it opened and remained there until it closed. In earlier years, Cleo enjoyed riding horses and gardening and in later years, she enjoyed traveling and watching The Price is Right and Jeopardy. She treasured the special times she had with her family and friends.