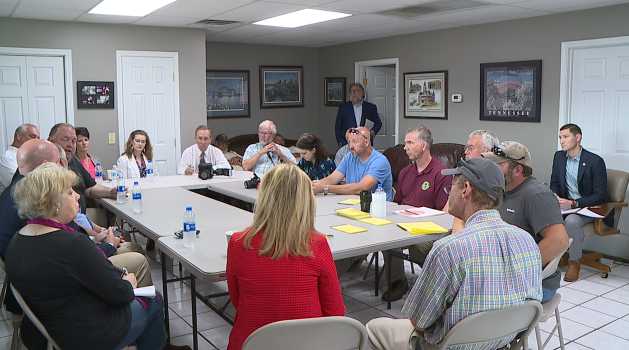 “Before the carp, no, I’ve never seen anything like this,” said local commercial fisherman Neil Matlock.

Asian carp are an invasive species that can crowd out the local fish. This can hurt the fishing industry and tourism, which many of the fishermen say has already started in Henry County.

“You can’t go to any area in the lake and not find carp. The carp are everywhere,” Matlock said.

TWRA Chief of Fisheries Frank Fiss says they are studying how effective a barrier at the Barkley Lock in Kentucky could be in an attempt to stop the migration and to lower the population of the invasive fish.

“We’re going to need barriers at the upstream reaches to stop them from moving on into waters where they don’t already exist,” Fiss said.

For small businesses like North American Caviar, harvesting carp isn’t as lucrative. Local fishermen agreed that they need more help from the state if they want to expand capacity and catch more carp.

“To deal with the cost of purchasing new equipment, new boats, and different stuff, the infrastructure we need here at the market,” Matlock said.

“Commercial fishermen that are working, their boats are too small. They could be a lot more effective if they had larger boats,” Fiss said.

Senator Marsha Blackburn says they will look into federal money, which could provide grants for the fishermen.

“The grants and loans that are available, to make sure that the equipment and the incentives are in place,” Blackburn said.

“It comes down to funding,” Matlock said. “Funding is the big thing now. Because there’s not a lot of money in carp.”

Blackburn says she will look at federal and state grant options that could be made available.

Warm and Sunny for One More Day Before Rain Returns Friday