GIBSON, Tenn. — A police department gains a new recruit, the first of his kind. 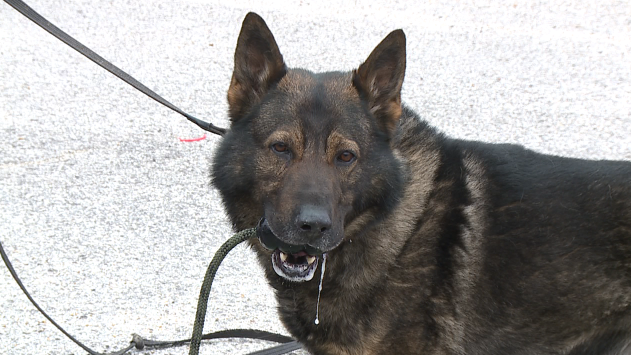 “It definitely will be an asset to the department. We’ve got a nose that will find the drugs,” Gibson Police Department patrol officer and K9 handler, Jay Morris said.

A new set of wheels and paws recently hit the streets in the town of Gibson.

This dynamic duo brings a little “chaos” to the Gibson Police Department.

“He likes me and that’s about it. At home, he’s a different dog, but when he’s in that vehicle and working, all he wants to do is work. It’s non-stop work,” Morris said.

4-year-old Chaos recently started at the department with a glowing resume.

“He’s a, what they call dual purpose patrol dog, which means he’s a narcotics dog. He will track people, apprehend people, do evidence and article search and recovery. He also does all of the agility and obedience, things like that,” Morris said.

Now, he adds the honor of Gibson’s first K9 officer in the town and department’s history.

“It opens up more avenues for us, as far as drug interdiction, or any kind of drug operations, also with tracking suspects,” Hardin said.

Chaos even has his own special ride, which the department picked up in Chicago.

“We found a Tahoe that was already outfitted with the insert for the K9, and it had all of the equipment for him,” Hardin said.

Chaos and his handler retired from the Gibson County Sheriff’s Department late 2019.

They’ve worked together since 2016, and Morris worked for the department for almost 30 years.

Morris explains some of his partner’s career highlights.