JACKSON, Tenn. — “In times like these we need decisive leadership, and while I commend the governor for his actions yesterday, it’s simply not enough to keep our communities safe,” Mayor Scott Conger said. 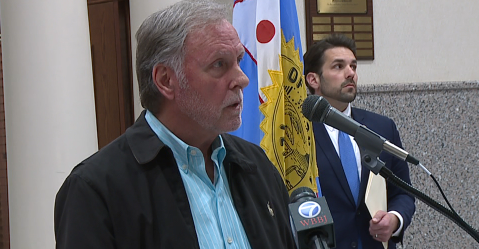 “All individuals currently living in the city of Jackson are ordered to shelter at their place of residence unless otherwise exempted as outlined in this order,” Mayor Conger said.

Life-sustaining businesses, including grocery stores, will remain open. However there will be some changes.

“Allow no more than 20 percent of stated fire capacity in stores at one time, require staff to count the number of customers entering and exiting the store, and to enforce limits,” Mayor Conger said.

“One of the things that we and the health department were really concerned on is the gathering of people within these big box stores: Home Depot, Lowe’s, Kroger. So that’s a part of the reason, to slim that down a little,” Madison County Mayor Jimmy Harris said.

“Do you want to take the risk of infecting your family, a child, your grandmother or somebody out in the public because you haven’t taken the precautions that we’re advising through this order,” Mayor Harris said.

The Jackson Police Department is advised to enforce this latest executive order.

“If a traffic violation occurs, they will stop the vehicle and ask where they were going and ask for proof of essential services,” Mayor Conger said.

Those who violate the order could face a fine up to $2,500 or even jail time, but local leaders hope it doesn’t come to that.

“We can all work together to get through this issue,” Mayor Harris said.