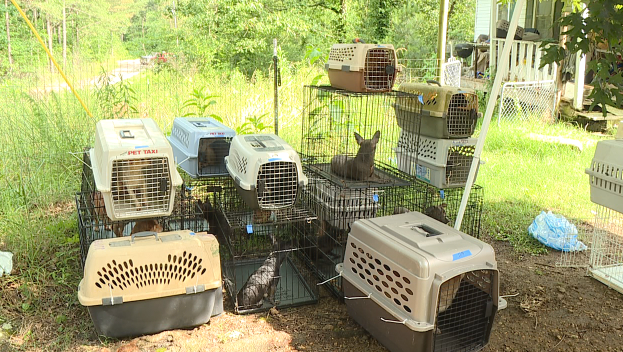 Rescuers said the pets were found living in poor conditions at a home on Saddleback Lane. Animal remains were also found in the home.

“These are mainly chihuahuas, as far as I can tell. There’s a couple that’s a little large for a chihuahua and a couple that are wirey haired,” said Hardin Animal Relocation and Transition Team founder Jennifer Penick.

Penick said some of the puppies are just weeks old.

“They’re all coded in fleas, which is not good for the babies. They end up very anemic or undersized,” Penick said.

The owner of the dogs has not been identified because they have not officially been served.

Officials with Hardin County Animal Services say they gave the owner multiple notices for the living conditions of the dogs.

Now that they are rescued, every animal will have a veterinarian check-up.

Penick says it’s important for people to speak up when they see animals living in unhealthy conditions.

“If you see someone that’s in trouble like this, it’s not necessarily their fault that they got in the situation. They’re afraid of telling somebody and asking for that help,” Penick said. “Please just don’t be afraid. We’re here to help.”

Rescuers say dog owners can avoid situations like this by spay and neutering their animals and making sure they are up-to-date on all of their vaccines.