JACKSON, Tenn. — The Tennessee Department of Transportation is partnering with the Tennessee Highway Patrol for a new social media campaign to raise awareness about increasing numbers of deaths on Tennessee highways. 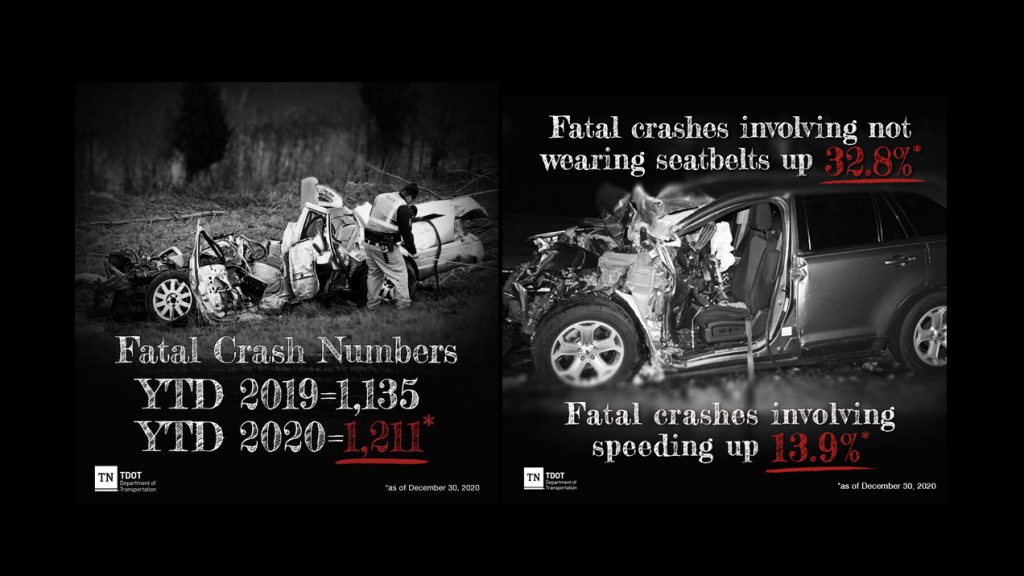 “Simple things that everybody can do to just take responsibility and understand that it’s not okay for these deaths to be occurring,” said Nichole Lawrence, community relations officer for the Tennessee Department of Transportation region four.

TDOT says, overall, fewer drivers were on the road last year, but the state still shows an almost seven percent increase in fatalities over 2019.

“People seem to be more interested in what’s in their hand or in the vehicle than what’s in front of them,” Tennessee Highway Patrol Sgt. Jena Eubanks said. “I use the five second rule. It takes less than five seconds put your seat belt on, put your phone away, and those two things right there can really make the difference.”

Lawrence and Sgt. Eubanks both say one death is too many.

“We’re not here to ruin your day, but to make it safer. It’s not just your life you’re putting in jeopardy when you’re driving down the road. You’re putting others’ lives in jeopardy,” Sgt. Eubanks said.

Together, they want to remind everyone to wear your seat belt, watch the speed limit, don’t drive impaired, limit your distractions, and don’t text and drive.

“You don’t want to be responsible for someone else’s life because you didn’t want to put the phone down,” Sgt. Eubanks said.

Throughout the week, TDOT and THP will post information on their social media platforms to raise awareness of the importance of safe driving.

Safety messages are also being displayed on TDOT’s overhead signs on interstates in Memphis, Nashville, Chattanooga and Knoxville.