Travel remains risky on roads throughout Hardin and Chester Counties

JACKSON, Tenn. — The last bit of snow from the winter storm came down Thursday in Savannah, covering up the roads once again. 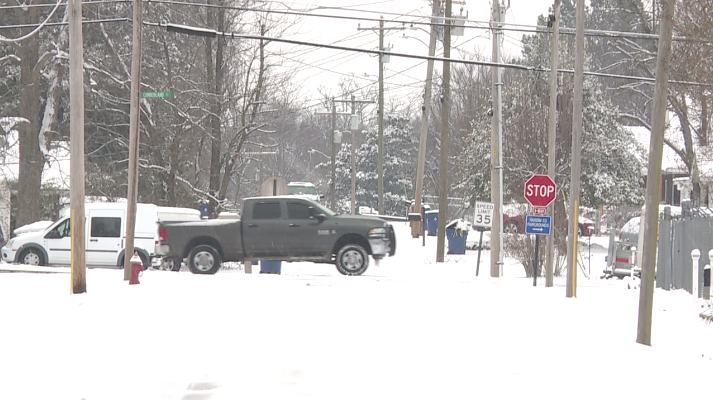 While Main Street is cleared off, it’s the non-busy streets directly off of Main that you need to be worried about.

“The main roads, shout out to TDOT, they have been wonderful to get the main roads scraped and back open. All the rural roads here in the city and in the county are still snow covered,” said Savannah Main Street Director Larae Smiley-Sliger.

Hardin County side roads are covered with a sheet of ice, and now an additional layer of snow, leaving them extremely dangerous.

Hardin County Sheriff Johnny Alexander says there are now more vehicles out even though driving conditions are worse.

“We’ve had numerous people just slide off in the ditch, especially this morning with this new snow we got,” Alexander said. “When this started, people were staying in, but I guess they got tired of staying in and just had to get out.”

Alexander says the many businesses that are closed may help keep residents at home.

Essential businesses are open, but they encourage everyone to stay off the roads until they are cleared.

“Getting people outside to play in this snow, even though it has been an issue with travel, has just been such a joy to get to see all the families together, all the kids playing, and there’s just nothing like it,” said Delaney Timberman, director of the Hardin County Chamber of Commerce.

Things looked similar in Henderson, with a clear Main Street and icy side roads. We spoke with a few college students who say luckily many businesses stayed open, giving them many locations to go inside and do virtual school.

“Everything’s closing early but the coffee shop over here has been open, we’ve been able to study there,” said Freed-Hardeman student Mason Minor. “They have been taking care of us and then the grocery store downtown has been good.”

Minor says many people have been out playing in the snow, but traveling by foot and sled. He says the roads are still too covered to get around.

“Earlier on they were pretty slick, and then they kind of cleared up, and then yesterday they got slick again,” Minor said. “Actually this is my car over here, I got stuck trying to get out of here.”

Randy Smith with the Chester County Highway Department says they are passable, but they are focused on getting the main roads and highways cleared first.

“We’re snow plowing them right now and have a salt truck running behind them,” Smith said. “Everybody just needs to be safe. If you don’t need to be out, don’t be out.”

Both the Hardin County Sheriff’s Office and the Chester County Highway Department advise the residents in those counties to stay home until the roads are cleared up — hopefully by the end of this weekend.