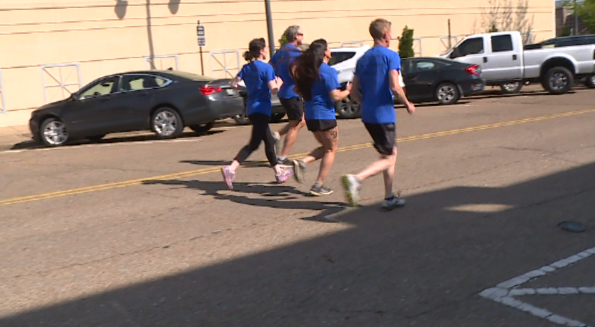 “This is definitely a challenge, but it’s a challenge I’m up for, and I’ve been training really hard for the last several months to prepare for this,” Broadway said.

On Thursday April 10, Broadway is lacing up his running shoes to run from the RockaBilly Hall of Fame, all the way to Beale Street in Memphis.

“This is just an incredible opportunity to not only raise awareness for Child Abuse Prevention Month, which is in April, but it’s also an opportunity to raise funds for our center which helps us to provide services for children and families,” said Kirbi Fahs, director of the Chester County Carl Perkins Center.

Broadway — who has been running for nine years — is hoping to raise $5,000 for the Carl Perkins Center.

He says even though running 100 miles will be a new challenge for him, he will have a full team helping him along the way.

“They’re going to be ahead of me every five miles, so every five mile point I can stop with them and get drinks, nutrition, food, change clothes, whatever I need at that time to keep moving,” Broadway said.

He also says the community is welcome to join him in a five mile segment or to even stop by and cheer him on, giving him motivation to complete the challenge.

“Just really excited to get going. The training is in, and I’m looking forward to Saturday morning and making my way to Memphis. I’ll be excited to see the Beale Street sign,” Broadway said.

For more information on Broadway’s journey to Beale Street and how you can help the Chester County Carl Perkins Center, click here.