MARTIN, Tenn. — Family and friends gather, release pink balloons and share their memories of Alisha Gadlen, also known by her family as ‘Keisha’. 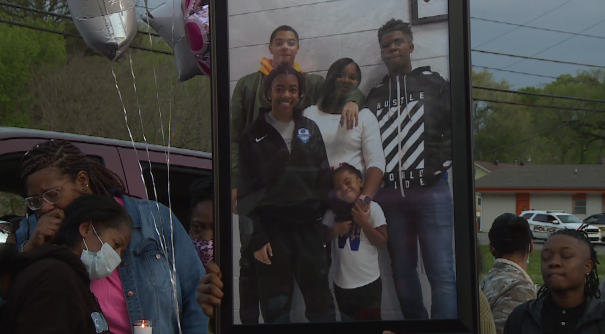 Investigators say Alisha was shot and killed on Wednesday in Martin during an altercation.

Now, her father Albert Wells,  stands in front of a crowd during a candlelight vigil on Saturday, sharing his last memories of his daughter and letting the children she left behind know they were loved by their mother.

“Ya’ll had a mama that loved ya’ll, and it wasn’t nothing that she would not do for ya’ll so I want you to know granddaddy is here now,” said Wells.

As a family member sings a prayerful song, and many share their memories, Alisha’s Godmother pleads for the community to stop gun violence.

“It’s too many of y’all to do this, this is senseless,” said the Godmother of Gadlen.

She says even though nothing can bring Alisha back the community needs to come together.

Investigators say Ashley Brown of Union City is in custody, charged with second-degree murder in connection with Gadlen’s death.

Police are still investigating the incident.