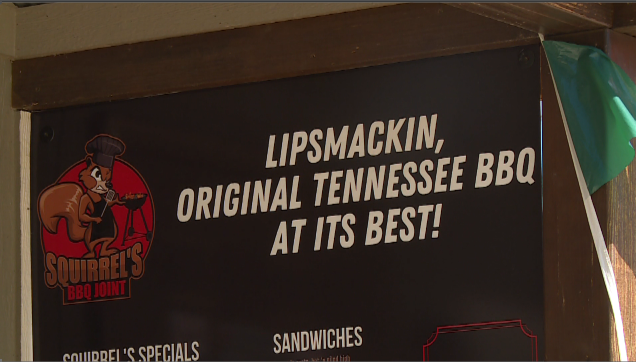 Mealer has over 20 years of experience cooking and serving in the National Guard, and now everyone can get a little taste.

“That’s what we specialize in, country-style food. I don’t really want anything out of a can,” said Mealer.

Mealer, also known to his family and friends as “Squirrel,” said this is not his first cooking gig.

“Probably in 1990 when we got deployed to Desert Storm, we didn’t have a mess hall with us. So, I put together this little thing called Squirrel’s Desert Kitchen,” Mealer said.

Now that kitchen has turned into his own restaurant. Restaurant co-owner and marketing manager Robert Foster came to Mealer with the proposition. He says Mealer makes the BBQ restaurant special because he is one-of-a-kind.

“We were so happy to help him with that dream, and he is the brains behind this operation. There is no Squirrel’s BBQ Joint without Squirrel,” Foster said.

Mealer says his goal is for people who eat his food to forget their troubles with one single bite.

“When I cook, regardless of what it is, if somebody takes that sandwich or that plate of food that they are eating, the minute they take a bit of that sandwich, whatever is troubling that person just kind of fades away,” said Mealer.

The restaurant’s grand opening will be May 15, and will be open Friday through Sunday.