JACKSON, Tenn. — “Faces of Our Veterans,” a project started by the West Tennessee Veterans Coalition, showcases photographs of veterans who have served and sacrificed for our country’s freedom. 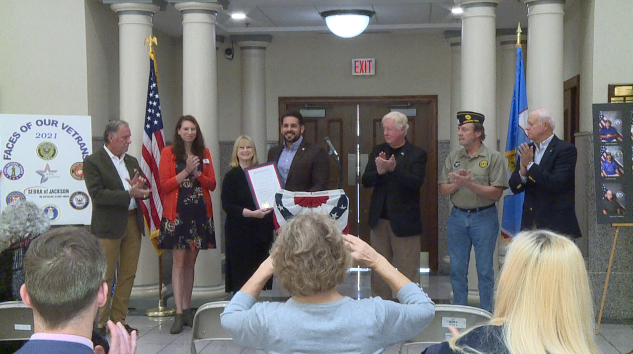 “We continue to this day to see our men and women step forward and make that ultimate sacrifice to defend us and make our country stronger,” said Elaine Christian, Jackson-Madison County Bicentennial Commission chair.

During the ceremony, Mayor Scott Conger recognized those who contributed to the display by adding a proclamation of Faces of Our Veterans Day.

Robert Jones was drafted in 1966 and served for 36 years until he reached the maximum retirement age in 2002.

“Probably one of the best things that I could have ever done in my life was be introduced to the military, and I was a conscript during the Vietnam era, drafted as were hundreds of thousands of other guys like me, but the military was a good fit for me [and] I stuck with it,” Jones said.

He says this exhibit means a lot to many, and keeping a focus on our veterans is vital for our country.

“It reminds me each time I look at one of them of the service members gave the ultimate sacrifice for us. And those are my brothers,” Jones said. “These are my brothers and sisters and I’m just, I’m just very happy to be a part of that family.” 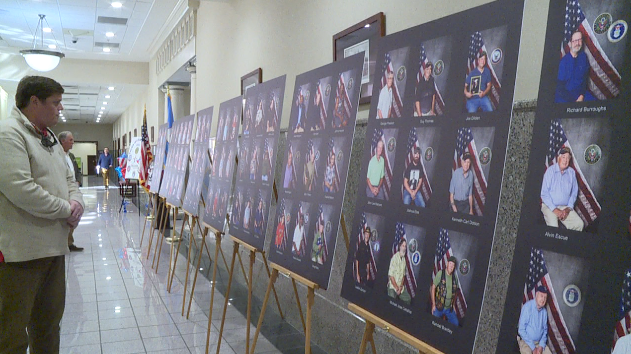 In fact, Jones says it is fun to look around and see so many familiar faces.

“We were both in the National Guard and he became the artillery battalion commander down here, the three of the 115 field artillery. He inherited me as his sergeant major. And through that initial meeting, and Business Association, if you will, we became very good friends. He’s one of my closest, closest friends.”

Each photo has the veteran’s name listed as well as a seal to show which branch of the military they served in.

Jones says over a two year period, over 400 local veterans have had their photo taken.

The exhibit will stay on display in Jackson City Hall until November 19.

The Madison County Bicentennial Commission has dedicated the month of November to focus on veterans’ services, and will have many more events to honor them.