HORNBEAK, Tenn. — You might’ve heard the song, but have you ever wondered what it’s like to walk through a winter wonderland? One local resort is turning that idea into a reality. 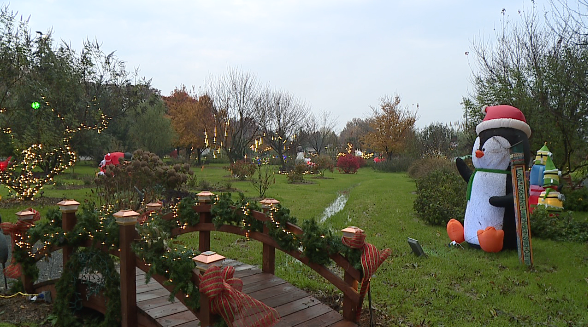 “We started out with a butterfly garden during the spring for our fisherman, then realized families love getting outdoors and doing things like that so, we were trying to think what do we need to do during duck season? Duck season is December through January so the perfect thing is easily, Christmas lights,” says co-owner Drew Hayes.

For the past several years, the Blue Bank Resort welcomes visitors and guests to their Winter Wonderland of lights.

“Everyone loves it pretty much. I mean, it’s being able to go walk through the Christmas lights because a lot of places now have been doing a lot of drive thrus. Few of them do walk-throughs, but not many. There’s just something about being outside walking around,” says Hayes.

The Wonderland trail is five dollars per person or ten dollars per family, giving you an all-access pass to nutcrackers, polar bears, Santa and his reindeer.

“Being able to see families come enjoy themselves, the atmosphere that we bring, I know some people are against this, but we love Christmas music so, we have someone singing Christmas music every weekend all throughout December and the end of November.” Hayes says.

The lights are usually on throughout the day, but when the sun sets, they illuminate the sky.

“As long as the weather is permitting we’re going to have them on as much as we can, so I recommend coming at night. That’s going to be the best time to see them,” says Hayes.

This weekend was the opening weekend for the winter wonderland, and if you’d like to attend, the lights will be up for the entire month of December and the first week in February.