As five former Athletes from the hub city were honored for all their
Hard work and dedication to the love of sports.

James Parker who was inducted into the Lambuth
Sports hall of fame in 2006 and Jennifer Moore Wilkerson who dominated
In softball as a pitcher.. 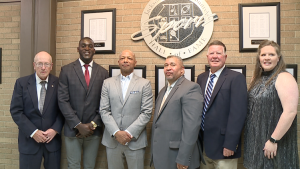 “We really here to celebrate all the inductees for tonight its exciting
time for all the accomplishments they’ve had over their careers so that’s what
most important tonight and we have some young people getting scholarships
tonight to as well just wanted to be here to say some positive things and help these
guys celebrate.”