LONDON (AP) — Prince Harry has accused the royal family of being complicit in his wife Meghan’s pain and Harry claimed that his stepmother Camilla had leaked private conversations to the media in order to burnish her own reputation. Harry said in interviews broadcast Sunday that members of the royal family got “into bed with the devil” to gain favorable tabloid coverage. He singled out Camilla’s efforts to rehabilitate her image with the British people after her longtime affair with his father. Harry spoke to Britain’s ITV, CBS’s “60 Minutes” and “Good Morning America” to promote his book “Spare.” Harry repeatedly blamed the media for the troubles that afflicted the Sussexes and the rest of the family. 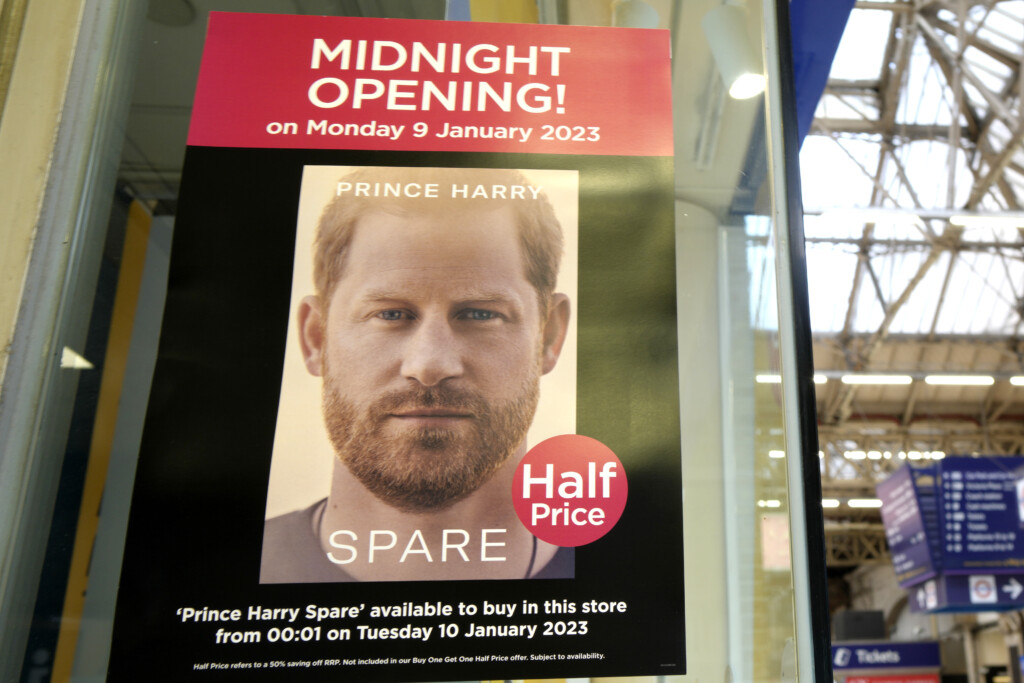 A poster advertises the midnight opening of a store to sell the new book by Prince Harry called ‘Spare’ in London, Monday, Jan. 9, 2023. Prince Harry has defended his memoir that lays bare rifts inside Britain’s royal family. He says in TV interviews broadcast Sunday that he wanted to “own my story” after 38 years of “spin and distortion” by others. Harry’s soul-baring new memoir, “Spare,” has generated incendiary headlines even before its release. (AP Photo/Kirsty Wigglesworth)

LONDON (AP) — Prince Harry has accused the royal family of being complicit in his wife Meghan’s anguish, claiming his stepmother Camilla, the queen consort, had leaked private conversations to the media in order to burnish her own reputation.

In interviews broadcast Sunday, Harry accused members of the royal family of getting “into bed with the devil” to gain favorable tabloid coverage, singling out Camilla’s efforts to rehabilitate her image with the British people after her longtime affair with his father, now King Charles III.

“That made her dangerous because of the connections that she was forging within the British press,” he told CBS. “There was open willingness on both sides to trade information. And with a family built on hierarchy, and with her, on the way to being queen consort, there was gonna be people or bodies left in the street.”

Harry spoke to Britain’s ITV, CBS’s “60 Minutes” and “Good Morning America” to promote his book, “Spare,” which is due to be widely released Tuesday. It has already generated incendiary headlines with its details of bitter family resentments.

Harry repeatedly blamed the media for the troubles that afflicted the Sussexes and the rest of the family. The coverage contributed to the rift with his brother, Prince William, and his wife Kate, saying it created tensions.

Harry was also unapologetic about launching legal battles against some parts of the British media, and said that his father feels it is “probably a suicide mission” to try and change the press. Harry described changing the media landscape in the U.K. as being “my life’s work.”

He repeated his claim on ITV that there was “concern” in the royal family about his unborn child’s skin color after he married biracial American actress Meghan Markle. Harry and Meghan first mentioned the incident during an interview with Oprah Winfrey in 2021, but they haven’t identified the family member who expressed concern

Harry insisted the family wasn’t racist, but said the episode was an example of unconscious bias, adding that the royal family needed to “learn and grow” in order to be “part of the solution rather than part of the problem.”

“Otherwise unconscious bias then moves into the category of racism,” Harry said. He said that “especially when you are the monarchy – you have a responsibility, and quite rightly people hold you to a higher standard than others.”

“Spare” explores Harry’s grief at the death of his mother in 1997, and his long-simmering resentment at the role of royal “spare,” overshadowed by the “heir” — older brother William. He recounts arguments and a physical altercation with William, reveals how he lost his virginity and describes using cocaine and cannabis.

He also says he killed 25 Taliban fighters while serving as an Apache helicopter pilot in Afghanistan — a claim criticized by both the Taliban and British military veterans.

“Spare” is the latest in a string of public pronouncements by Harry and Meghan since they quit royal life and moved to California in 2020, citing what they saw as the media’s racist treatment of Meghan and a lack of support from the palace. It follows the Winfrey interview and a six-part Netflix documentary released last month.

In the ghostwritten memoir, Harry, 38, describes the couple’s acrimonious split from the royal family after their request for a part-time royal role was rejected.

The television interviews are certain to pile more pressure on the royal family. He is also appearing on “The Late Show with Stephen Colbert.”

Royal officials haven’t commented on any of the allegations, though allies have pushed back on the claims, largely anonymously.

Harry has defended the memoir describing it as his effort to “own my story” after years of “spin and distortion” by others. In the “60 Minutes” interview, Harry denied that his book was intended to hurt his family.

Omid Scobie, author of “Finding Freedom,” a book on the Duke and Duchess of Sussex, said Harry is offering the look behind the palace walls that the public has always desired.

“Of course, that does come with some downsides for those who have been part of his journey,” Scobie told the BBC. “We heard some sort of really startling confessions and stories about members of the royal family, particularly when it comes to Camilla and her relationship with the press.”

While Harry said that he hadn’t spoken with his father or brother in a while, he hopes to find peace with them. Harry told ITV that he wants reconciliation with the royal family, but “the ball is in their court.”

“They’ve shown absolutely no willingness to reconcile,” he said.

Jill Lawless contributed to this report.