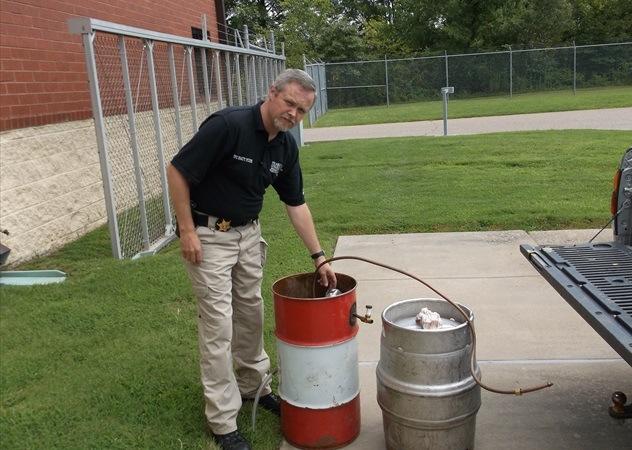 PALMERSVILLE, Tenn. – The Weakley County Sheriff’s Department said for the first time in more than 30 years they caught a moonshiner, or someone creating moonshine. The man accused is Carl King, who said he was not creating moonshine, but ethanol to run his farm equipment. King said tending to his nearly 100 acre farm is not only tiring but costly, and that was why he began creating his own fuel. “All of a sudden it became like it was more than ethanol, and it was not,” King said. Creating ethanol is legal and even tax deductible. A person can get 60 cents back on every gallon of fuel made come tax time. Saving money on gas and later on taxes was King’s goal in creating the product. Authorities however say ethanol was not what he was creating. During the seizure, five gallons of whiskey and a still were taken from his home. Carl’s wife, Melissa King said authorities need to learn the difference between ethanol and moonshine. “I think they should out to be getting the meth dealers and big time drug dealers. Not doing an investigation like this,” she said. Investigator Marty Plunk said they investigated a tip that led to the bust for months, and even had people try the product. King said this is not true and said if people tried his ethanol they would become violently ill. King said his product is only used to fuel his farm equipment. “If more people would take and try to make fuel and conserve drawing it from the earth, this earth would last a lot longer,” he said. Kings said after he found out he could not only save gas but could use making ethanol as a tax write-off he saw an opportunity he could not refuse. He said he can understand authorities confusion because ethanol and moonshine have a very similar distilling and fermentation process. “I do my best to stay on the legal side of the law. I appreciate them and we need them,” King said. Carl King will be in court, Thursday. Weakley County authorities said at most he will face up to six months in jail.