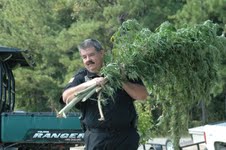 CARROLL COUNTY, Tenn.– The Carroll County Sheriff’s deputies seized and destroyed more than 1,000 marijuana plants during an operation with the Governor’s Task Force on Marijuana Eradication, Monday. Investigators said around 700 marijuana plants were found hidden in the woods off of Yuma Road in Yuma. Residents there told WBBJ 7 Eyewitness the wooded area is frequently visited by strangers. “I suspected maybe people had their own little private operations but nothing like that,” said neighbor Bill Mikolajczak. Deputies said helicopters circled the county allowing agents to spot the plants from a bird’s eye view. Officials said the plants were scattered throughout the woods just behind the trees, right beside the popular trails. “He was right in this area taking the tops off the trees almost,” said neighbor Roi Denning. “Very surprising right next door to me and behind me, unbelievable.” Deputies said their investigation is far from over, they’re still trying to find suspects connected to the crime. Neighbors said they’re just thankful the drugs have been removed from their neighborhood. “I thank them very much for coming out here and cleaning this up and making the effort to get it out,” said Mikolajczak. “I hope they catch all of these plants out here and burn them as far as I’m concerned,” said Denning. Law enforcement officials said all of the plants seized during their sting, were burned.