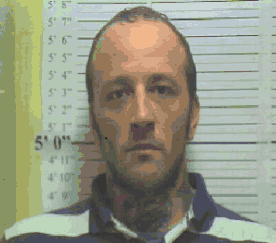 DRESDEN, Tenn. – Weakley County deputies said a man was caught making meth, then led deputies on a high speed pursuit while continuing to shoot up meth. The chase ended on Sandra Braddy’s yard, and narrowly missed her home. “If my niece or my nephew or any other kid had been out here today they would be dead,” she said. Deputies said Investigator Marty Plunk stopped to check out a truck pulled over on Highway 45, north of Martin around 10 a.m., Tuesday. Investigator Plunk said he caught the driver, Wesley Hatchel, making meth. Investigator Plunk said he witnessed the driver reach in the side console he thought he was reaching for a weapon. That’s when Investigator Plunk took aim and fired, Hatchel took off beginning a more than 30-minute pursuit. “When we approached the city of Dresden, officers fired several rounds into the radiator of the car,” Captain Randall McGowan said. The suspect, Hatchel, then reportedly rammed an officer’s car. To protect citizens and stop Hatchel, officers fired multiple rounds into his car. “Officers behind him observed him throwing the meth lab out the window different places,” McGowan said. “Another officer said he saw [Hatchel] with a hypodermic needle shooting up while he was driving down the road during the chase.” The chase landed in Sandra Braddy’s front yard. She said it was a scary reminder of everyday is not guaranteed. “If my daughter, or niece, or grandson had been out here today would have been a lot different,” she said. Officers say Hatchel is charged with meth manufacturing, three counts of aggravated assault of an officer, reckless endangerment with a deadly weapon, felony evading possession of narcotics and tampering with evidence. “We took him to the hospital because he was complaining of pains,” Captain McGowan said. “We think he ate some of the drugs before he pulled over.” Braddy said she was worried about the lasting impact the chaos will have on her children. “We were just concerned about getting the truck with the lab in it out of the yard so the kids didn’t go no where near it, or pick something up they didn’t need to be touching,” she said. Deputies said the suspect was just released from jail last week on theft charges. He is currently behind bars without bond.