Former Minister Charged with Sex Crimes Against a Minor 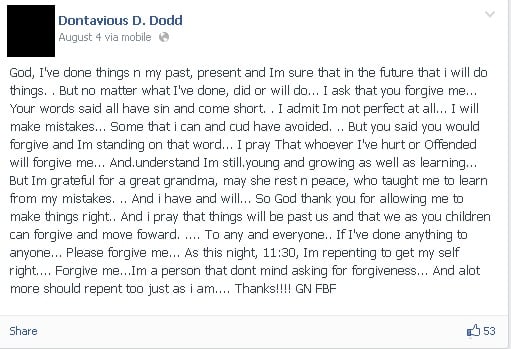 JACKSON, Tenn. – A Jackson man, who previously served as an associate minister at a church, was jailed and charged for alleged sex crimes against a minor Thursday morning. On August 5, the Jackson Police Department’s Special Investigations Bureau was notified about Dontavious Dodd, 21, allegedly soliciting a 14-year-old girl for sex. Investigators believe that, in July, Dodd solicited the girl for sex via the Internet and sent the girl a sexually explicit image via the Internet. “They’re supposed to be the highest ones on the totem poll,” said concerned Jackson resident, Kyle McWilliams. “If they are doing that it makes you sad. What is this world coming too?” Police said when Dodd learned about an impending investigation, he intentionally deleted the sexually explicit content that was stored on the girl’s social media account. Investigators presented the investigative findings to the District Attorney General’s Office, and the decision was made to present the case to the grand jury on September 3. The Madison County grand jury returned a five count indictment against Dodd charging him with three counts of soliciting sexual exploitation of a minor, one count of solicitation of a minor and one count of tampering with evidence. Dodd was arrested Thursday and booked in at the Madison County Jail. He was released on $40,000 bond. Dodd’s formal arraignment is scheduled for 8 a.m. Monday in Madison County Circuit Court, Division I. “He should not break that sacred trust,” said Pamela Jeckson. “Young people should be able to come talk to him about his problems.” Dodd is an associate minister with the youth department at Greater St. Luke Baptist Church in Jackson. When investigators learned of the allegation in early August, they notified the church because the victim in this case is a member. The church was responsive and immediately suspended Dodd’s responsibilities in youth activities. Police said the church has been cooperative in the investigation. Church leaders declined to talk to 7 Eyewitness News on camera but did tell us Dodd has been a member of the church since he was young, and always had a good heart. Dodd had previously applied to be a chaplain with the Jackson Police Department. After passing a criminal background check, Dodd was granted voluntary privileges as a police chaplain on May 2, 2013. Even though Dodd spent one week “on-call” as a chaplain, the cause never arose for him to be called by police for chaplain assistance. Once the department launched the criminal investigation, Dodd’s chaplaincy privileges were revoked.