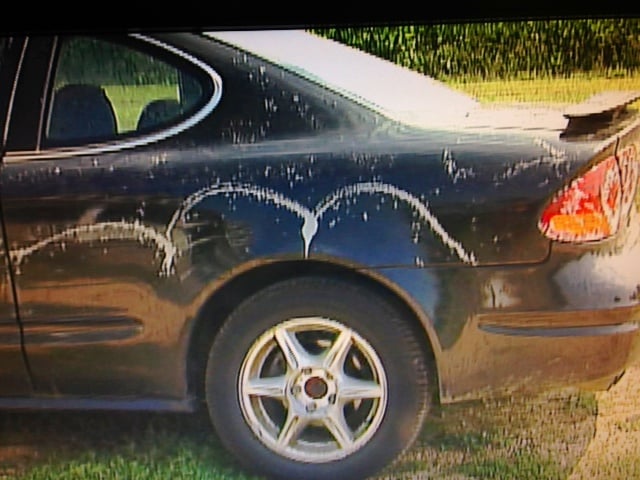 HENDERSON COUNTY, Tenn.- Henderson County Deputies are investigating after two family cars near the Westover community were vandalized with an acid-like substance. “I’ve seen acid poured on cars before but not to this magnitude,” said Capt. Tracey Grisham, Henderson County Sheriff’s Dept. “The area of coverage is possibly the most dollar value I’ve ever seen.” The victims told WBBJ 7 Eyewitness News that the culprit sprayed down both parked vehicles with the acid-like substance sometime in the middle of the night. In addition to the damage, victims found several construction nails scattered across their yard and driveway. “It’s made me very cautious of my surroundings and my family’s surroundings,” said one victim.”It’s kind of scary that there are people out in the community that would think of something that is so harsh.” Deputies told WBBJ 7 Eyewitness News they believe the family was targeted, but owners said they didn’t know of anyone who would do this to them especially in a place where their children and pets live. Officials said both cars were left unlocked, but nothing was taken. Car owners said the total car damage is estimated to be more than $6,000. “It’s something we can’t fix, we can’t afford to spend $6,000 dollars on our vehicles that were vandalized,” said the victim. If captured, deputies said the culprits face felony charges. So far no arrests have been made and investigators said no other cases of this type of vandalism have been reported. “Children could have gotten a hold of it, causing skin damage or if they ingested it could have possibly caused death,”said Capt. Tracey Grisham. “It’s very serious, It could have been a bad deal.” If you have any information that could help law enforcement in this case call the Henderson County Sheriff’s Dept.