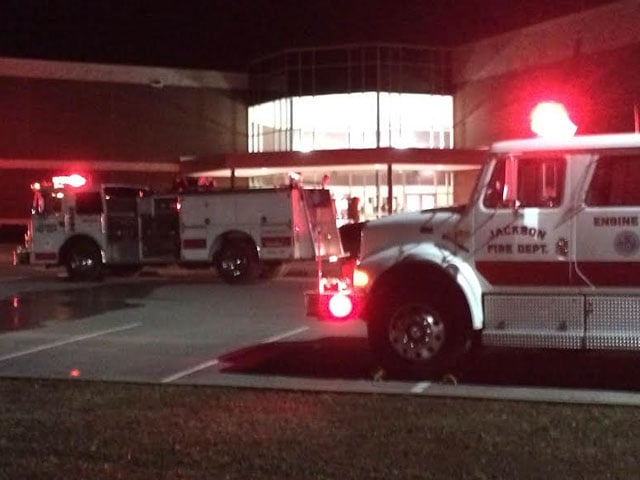 NORTHEAST JACKSON — A suspicious fire is being investigated by the Jackson Police and Fire Departments. The Jackson Fire Department was called to Liberty Technology Magnet High School on Ridgecrest Road Thursday evening around 6:50PM for an active fire. “What caught fire was the paper towel dispenser and it’s not electronic, so there’s no way that it could just burst into flames,” Lt. Jeff Shepard with the Jackson Police Department said. The fire was limited to the bathroom area of the gymnasium‘s locker room. The automatic sprinkler system activated and put the fire out. “Fire was put out quickly, contained to that one area, and there was just a little bit of smoke in a couple rooms nearby,” JMCSS Public Relations Specialist Ginger Carver said. Fire Department personnel believed the fire was intentionally set and notified the Police Department. Liberty High School‘s basketball team was having practice at the time of the fire and several athletes, coaches and managers were in the school at the time. “One of the managers of the basketball team discovered the fire and he actually went in there to put the fire out,” Lt. Shepard said. The manager that discovered the fire was treated for smoke inhalation at Jackson Madison County General Hospital. He had attempted to extinguish the fire with a cooler full of water. He was treated and released from the hospital. An Arson Investigator from the Criminal Investigation Division was called to the scene. Police and Fire officials are investigating this fire as being intentionally set. Anyone with any information about this incident is asked to call the Criminal Investigation Division at 731-425-8400 or Crime Stoppers at 731-424-8477.