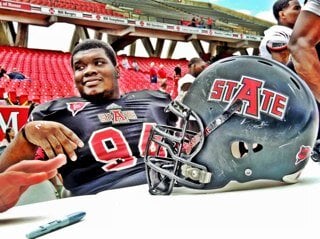 JACKSON, Tenn.- Friends said a life full of potential was cut short. “I just can’t believe someone would do something like this,” Corderius Dodd, a friend of Markel Owens, said. Owens, a defensive lineman at Arkansas State University in Jonesboro, Arkansas was one of two men shot and killed in the home invasion on Walker Road Wednesday night. Owens’ stepfather, Johnny Shivers, was also killed. Micah Simmons, who is Shivers’ nephew, played football with Owens while at Liberty Tech. “It’s kind of tough because Markel was like a brother to me,” Simmons said. Simmons describes his friend as warmhearted and a man who loved his family and football. Owens would have been graduating from Arkansas State in the spring; and recently helped his team win their second consecutive title at the GoDaddy.com Bowl, against Ball State. Friends said he had a bright future on and off the field. “I hate that he won’t be able to fulfill his dreams,” said Simmons.