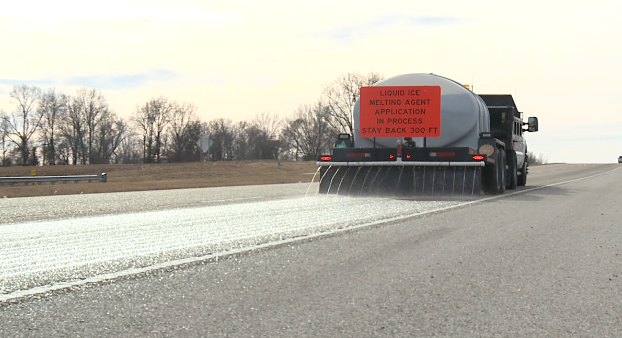 JACKSON Tenn.,- Nearly a half a million gallons of road treatment mixtures have been used by the Tennessee Department of Transportation crews this winter. TDOT officials told WBBJ 7 Eyewitness News so far crews have poured out 300,000 to 400,000 gallons of salt brine mixtures onto West Tennessee roadways. “We have seen it a little quicker this year because of the hard freeze that we’ve had. It’s been a lot colder so that plays a big part in that,” said TDOT’s Community Relations Officer, Nichole Lawrence. With the early start to cold temperatures, crews said it is on track to use just as much, if not more road treatment mixtures than last year. Lawrence said small threats for winter precipitation like West Tennessee saw Thursday night have kept crews on the roadways. “With a small chance of precipitation we try to just be on the safe side to keep our streets as safe as possible,” said Lawrence. The mixture only costs TDOT about six cents per gallon. Officials said although they are out on the streets more this year they are not in danger of going over their $3.9 million budget. “We have a budget every year that’s set aside each year for the cost of winter and winter weather,” said Lawrence. “We’re in good shape right now.” TDOT leaders said they are also keeping their eyes on next week’s forecast for more potential winter weather.