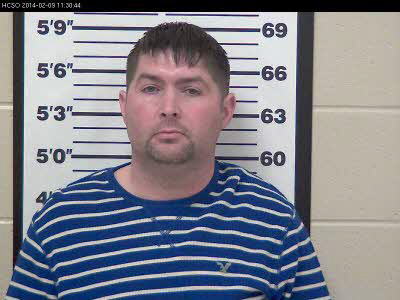 HENDERSON COUNTY, Tenn.- Deputies in Henderson County have arrested one co-business owner for theft of his neighboring business which is located in the same building. “What doesn’t make sense to me is it was so easy to figure out once we knew about the alarm system and how it was set up,” said Capt. Tracey Grisham, Henderson County Sheriff’s Dept. “I don’t see anyway he could get away with it.” Investigators charged Christopher Burns, 31, with theft over $500, Tuesday. Burns, who is the co-owner of Oil Wholesalers in Lexington, is accused of stealing hundreds of dollars worth of air compressors from Zheiang Hongyou Air Compressors business. Investigators said both Oil Wholesalers and Zheiang Hongyou Compressors are located in the same warehouse building off of Highway 412. Officials said Burns was developed as a suspect after it was discovered that his personal alarm code was the only code used to disarm the alarm on the building during the time of the theft. “At the time of the theft, the only division between the two businesses on the inside of the building was some wire described to me as hog wire,” said Capt. Grisham. “There was no forced entry….I don’t think that he realized that each person had a separate code.” Investigators said a total of 18 air compressors were taken, each was stacked on a palate. Deputies believe Burns used a forklift to remove at least three 400 pound palates from the neighboring business. Deputies said they could not charge Burns with burglary because he technically has a legal right to be inside of his half of the building. “We can not prove that he crossed because of where these things were stored, it was so close to the line it is possible that he didn’t actually cross over,” said Capt. Grisham. “It is possible the machine itself could reach over where they were from his side of the building.” The theft victim told WBBJ 7 Eyewitness News that Burns was the last person he would have suspected. He said he was disappointed that a neighbor and friend could do this. The victim said he has made peace with his neighboring business’ other co-owner who was not involved in this theft. He said he plans on keeping his business in the building, as long as Burns is not welcomed back. Burns is charged with one count of Theft over $500. Deputies said he is now free on $1,000 dollars bond. If you have any information that could help authorities in this case call the Henderson County Sheriff’s Department at (731) 968-7777.