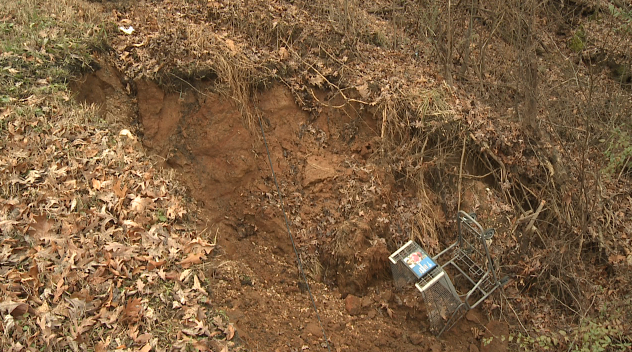 JACKSON, Tenn — Concerned residents contacted WBBJ 7 Eyewitness News Tuesday about a sink on North Parkway. City officials said the sinkhole was first reported to JEA on Friday. Residents who live in the area said it needs to be fixed before it becomes even more dangerous, especially since school children pass it every day. Exposed pipes and utility lines can be seen in the sink hole, inching toward North Parkway; it even caused a utility pole to lean. Officials for the city of Jackson said sinkholes like this happen as a cause of winter weather. “Weather just freezing and thawing, and the earth is moving and the water will get under it. Push it up, move it along. Just mother nature,” Assistant Superintendent of Storm Water for the City of Jackson, George Barnes told WBBJ 7 Eyewitness NewsTuesday. Barnes said the most important thing is to keep the roads safe for drivers. “We make a determination of what you need to do, whether its immediate or block it off or cone it off,” Barnes explained. “You’ve got to protect the motorized traffic.” The sinkhole stops just a few feet from North Parkway. Officials said untreated it could reach the street. Residents who live nearby told said that they are concerned about the sinkhole. “It’s very concerning, because you turn that corner and you don’t know if you’re gonna make it or not, you know,” Celine Liska, who lives near the sinkhole said. The city cannot begin construction until they know exactly where utility, sewer and gas lines are located. Workers who were inspecting the sinkhole Tuesday said they expect work to begin on fixing the problem early next week.