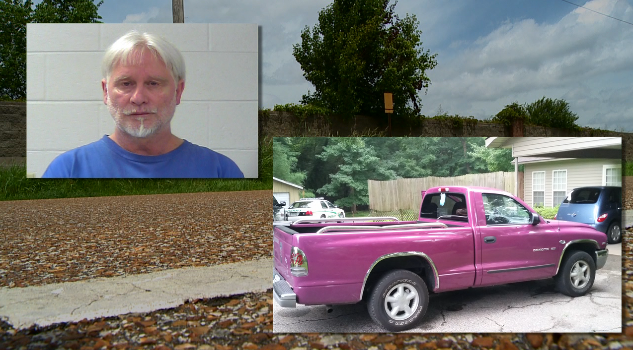 TRENTON, Tenn. — Gibson County deputies identify the man they say is responsible for a weekend hit-and-run that left a man and young girl severely injured. The arrest comes after investigators were flooded with tips from all over the Mid-South. Deputies say Dwayne Brasfield is the man who hit 9-year-old Paige Helton and her neighbor, Mike Doss, while they were riding on a motorcycle Sunday night. Now investigators are praising the help they received from the public as well as from Paige herself. “She teared up, and her mom asked her ‘why are you crying?'” Paige’s grandmother Sheila Inman said. “She said ‘oh, it’s happy tears!'” Deputies say Brasfield was driving a bright purple Dodge Dakota pickup truck when he hit the motorcycle, got out to look and then took off. “There were a lot of just civilians out there looking for that truck, so everyone worked at it,” Inman said. Investigators say they narrowed it down by looking at cars registered in Gibson County with the help of some evidence left at the scene. “We’ve got this vehicle, we’ve got the owner and the vehicle is missing a passenger headlight,” Gibson County Sheriff Paul Thomas said. “We knew the headlight that was missing was going to come from the passenger side of the truck.” Once in custody, Brasfield also admitted to deputies he cut his hair after the incident. Paige originally told police she thought the driver was a woman with long, blond hair. “You have to remember she was struck by the vehicle — she was in the road traumatized,” Sheriff Thomas said. “But in the end it actually was a man with long, white hair.” With an incident some never thought would be solved now coming to a close, family members say this is what they’d hoped for. “The Bible says you’ve got to forgive, but it doesn’t tell us we have to forget,” Inman said. “So I guess in time we will forgive, but Paige, she probably already has.” Brasfield is currently being held at the Gibson County Correctional Complex in lieu of a $200,000 bond. Paige is expected to return from the hospital sometime Wednesday evening while we’re told Doss is still in the ICU.