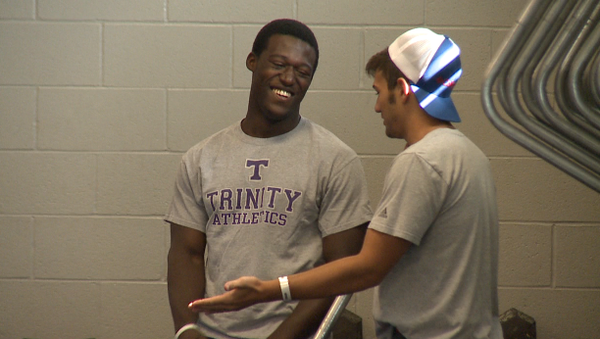 NORTHWEST JACKSON, Tenn. – TCA’s football team is adjusting to more than just a new region alignment. The Lions will enter this season with a first-year starter under center. “The graduation of Kyle, that’s kind of everyone’s question,” head coach Butler said.”What’s TCA going to look like now?” Replacing the most decorated quarterback in school history is a tall order. Kyle Akin, who is now at the University of Tennessee at Martin, is Trinity’s first-ever Mr. Football winner. “I’m not nervous. I know I have the ability to perform.,” quarterback Tristan Bonnstetter said. “I just want to be successful for my teammates.” Bonstetter says it will come down to repetition. He’s reached out to Akin for help. “Kyle has been a big part of my transition. Me and him started throwing on the field together,” Bonnstetter said. “He’s part of the reason I’m here.” Coach Butler has been impressed by Bonnstetter’s summer workouts. “He’s done a good job this summer and in the spring,” Butler added. “We feel good about what we having coming back this year.” One of those returning leaders is running back Andrew Goldsmith. The senior is confident about his new leader under center. “We’re not going to be that different,” Goldsmith said. “Just keep working hard.” Goldsmith is ready to keep the Lions at a high level. Coach Butler says the key to doing that is work ethic not talent. “If they continue to buy in what we preach to them daily and ask of them — the success will come,” Butler said.