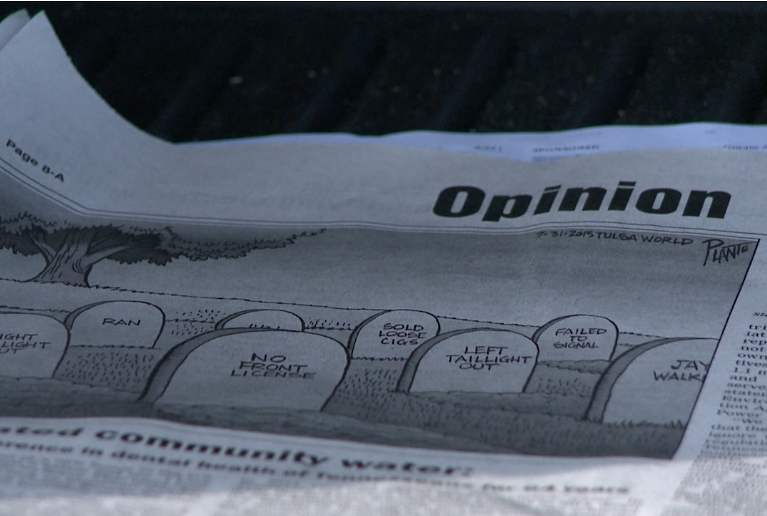 HENDERSON, Tenn. — A political cartoon published in a West Tennessee newspaper is now drawing heavy criticism, most notably from District Attorney General Jerry Woodall who says the cartoon depicts law enforcement as executioners of innocent people. “They should apologize to us for being kind of stupid,” Merle Little said. That is a common opinion among several Chester County residents who said the political cartoon published by the Chester County Independent degrades men and women in law enforcement. “It’s really bothersome to me to be honest,” Angie Hysmith said. “These guys go out every day and put their lives on the line for you and me and everybody else.” “It makes me feel like people are after our cops,” Little said. “They want to complain they killed too many black people, and they complain they do this and that.” A letter Woodall sent to the Independent’s editor, James Webb, reads in part, “These tombstones carry epitaphs which unfairly and in an inflammatory manner depict law enforcement officers.” “I just think it’s in poor taste,” Hysmith said. “I hope it’s an oversight on the newspaper’s part.” Several of our attempts to reach out to the paper for comment on the cartoon were unsuccessful. Roy Burgess said he is a retired police officer and that jabs like these are damaging to law enforcement. “I would have been afraid. I don’t know if I would have been a policeman right now,” Burgess said. Other residents agreed. We talked with several people in Chester County and could not find anyone who sides with the Independent. Most said more should be done to improve the relationship between the public and those who serve and protect instead of tearing it down. “We have to take a step back and take a look at the big picture,” Hysmith said. “We have to be law-abiding citizens, and they have to do a job.” To see Woodall’s full letter, find the link in the Seen on 7 section of our website.