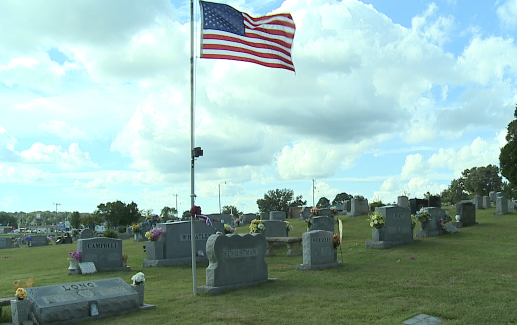 CAMDEN, Tenn. — A family in Camden wins their fight against city leaders who had ordered them to remove an American flag from a loved one’s grave. “Where is the permission? Where did they allow you to do that? I have no permission,” Camden Mayor Roger Pafford said. A packed house at the Camden City Council meeting Monday was all over a flagpole in the city’s cemetery. “It’s not a thing about the flag. It’s a thing about the obstruction. It’s about violating the cemetery rules,” Pafford said. The mayor said the flag pole next to the grave of Purple Heart recipient Carl Christman violates a city ordinance and causes problems for cemetery workers. Pafford had told the family the flag and flag pole had to come down. “It takes over nine hours now to mow that cemetery, and that’s having them go around everything and weed eat around it all,” Pafford said. The big discrepancy between both sides is when the flagpole was put in the ground. The Christman family said it has been there since 1995, but Pafford said city workers did not notice the pole until recently. The city of Camden met Monday to discuss the issue. The Christman family showed photos of the flag pole dating well before the ordinance banning such items was passed in 2005. “It don’t make no sense to me,” Paul Christman said. “It’s been there for 20 years. Now all of a sudden they are stressing over cutting around it.” But ultimately the Christmans prevailed, keeping the flag just where it is. “It makes me feel proud because we are standing for something that stands for something right,” Christman said. “My father did this, their fathers did this and we want to prevent this from happening to other fathers in the next graveyard.”