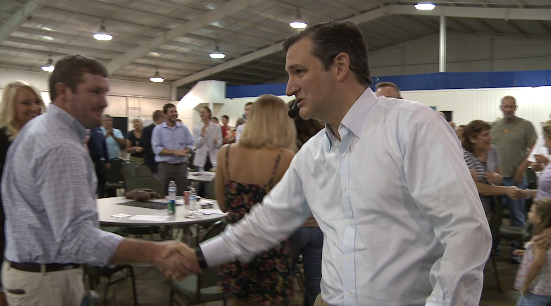 JACKSON, Tenn. — Senator Ted Cruz entered the Jackson Fairgrounds with hundreds chanting for the man they want to be the next president of the United States. “I just love his passion. I love what he stands for,” voter Cheryl Warren said. Senator Cruz brought along his wife, Heidi, and two daughters for a tour through the South. “We have seen standing-room-only crowds everywhere we’ve gone,” Senator Cruz said. “People are enthusiastic. They are passionate.” The Texas senator said there’s a reason for that passion. “People are hungry to get back to the common-sense conservative principles America was built on, the free market principles and constitutional liberties that have made America great,” Cruz said. He also addressed gun control in Tennessee. “My wife and two girls put up five flags in honor of those four marines and that sailor who were murdered,” Cruz said. He also talked about one thing he’d really look forward to if he were to get the Republican bid for the White House. “I can’t wait to stand on that debate stage next to Hillary Clinton,” he said. Cruz said he’d get rid of Common Core education standards, adopt a flat tax and that current deals with Iran under the Obama administration are a joke. The Madison County Republican Party said the election is closer than it seems. “Even though it still seems a long way out, it’s really not in terms of the upcoming primaries happening in early 2016,” Chairman of the Madison County Republican Party Dustin Summers said. Super Tuesday, when voters decide who will be on the Republican ticket, is March 1, 2016. Senator Ted Cruz continues his campaign tour on Tuesday throughout cities in Mississippi and will make one more stop in the Volunteer State in Memphis.