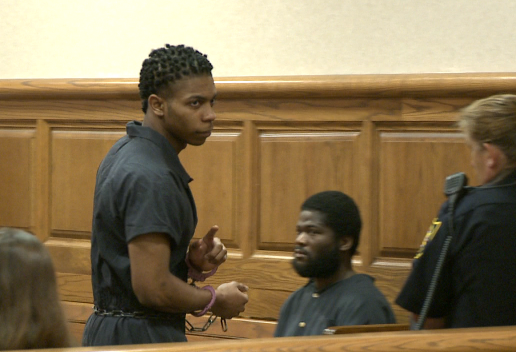 JACKSON, Tenn. — A man pleaded guilty to two counts of aggravated assault Monday in a deadly 2014 shooting. Jernigel Blackwell was originally charged with second-degree murder in the shooting death of Shomari Peterson. That charge was reduced to aggravated assault as part of a best-interest plea deal. Blackwell is sentenced to serve two nine-year sentences to be served consecutively. The second aggravated assault charge stemmed from accusations of shooting and injuring Thomas Reid during the same incident. Peterson was shot and killed July 27, 2014, at Parkway East Apartments located at 33 Carver Avenue. Earlier this year, juvenile judge Christy Little determined Blackwell, who was 17 years old at the time, would stand trial as an adult. On Aug. 13, a jury convicted Blackwell’s brother, Jakeil Waller, of second-degree murder and reckless endangerment in Peterson’s death. Prosecutors said ballistics reports determined Waller fired the shot that killed Peterson. “Proof was shown the defendant fired shots not only into the direction of Shomari Peterson but fired in the direction of Thomas Reid, and most likely that was the shot that hit Thomas Reid,” Assistant District Attorney General Aaron Chaplin said when addressing Blackwell’s second charge of aggravated assault. Thomas Reid’s mother was present at the hearing Monday and said she is happy with the ruling and that justice has been served. “My son is still here. I thank God for that because the injury that he did receive, they were death injuries, and God wasn’t ready for him to go,” Wavier Reid said. “The only thing I was looking for was for him to turn around and say I am sorry. But we didn’t get that, but we are OK. God is good,” she said.