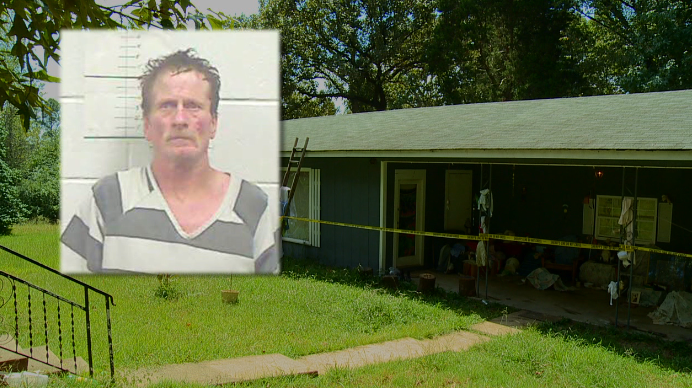 BENTON COUNTY, Tenn. — A violent fight inside a Benton County home forces a deputy to kick down the door. Inside, the officer says he found a bloodied boyfriend and girlfriend who used anything within reach to hurt each other. “It was very brutal,” Benton County Sheriff Kenny Christopher said. “There was lots of blood. There was blood everywhere throughout the house.” Deputies said Hillery Murphy and his girlfriend got into a true knock-down drag-out Tuesday night. “Seems to be some confusion as to who did what,” Sheriff Christopher said. “There was an ax handle and a knife and stuff involved.” Investigators said Murphy’s girlfriend smashed him over the head with an ashtray during an argument over being evicted. They say he then hit her with an ax handle. “The whole house was just covered with blood — the floors, the walls and the tables,” Christopher said. “They’d been fighting for some time. It wasn’t just one or two licks.” Deputies said when they arrived on scene they could hear yelling and screaming coming from inside the home. When no one answered, they said their deputy had to spring into action, kicking down the door. “He heard him run through the house, and he came out of a bedroom holding a knife,” Christopher said. “He approached the suspect and on three occasions asked him to drop the weapon.” Murphy was then quickly taken to the ground with a Taser and arrested. His girlfriend, suffering from severe head trauma, was airlifted to the hospital. “Tempers flared, and when you mix the drugs and you mix the alcohol, which is involved in most domestics, it just gets out of hand and escalates,” Christopher said. And this wasn’t the first time. Deputies said the couple has a history of violence, and neighbors said they’ve seen it too. “That’s mostly what drunks and dope heads do, fight between one another,” Darrel Fretwell said. Murphy is charged with aggravated assault on a police officer and domestic assault, but the sheriff said more charges are pending. His girlfriend is currently in stable condition at Vanderbilt University Medical Center and may face charges as well.