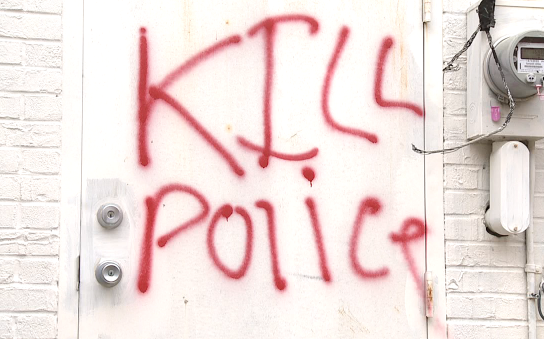 HUMBOLDT, Tenn. — West Tennessee police continue their hunt for a group of vandals responsible for spray painting businesses with vulgar and hate-filled messages. It is causing fear for some Humboldt residents. “It’s a good city, but I don’t know why they want to do this,” said Angela Eppler, who lives nearby. “It’s like something gang-related, and I think it should be against the law for somebody to do that.” The vandalism occurred behind a group of businesses, including the Carl Perkins Center for the Prevention of Child Abuse in Humboldt. The graffiti references drugs, hate symbols, vulgar language and even a disturbing message directed toward law enforcement. “Makes me feel like the parents need to do a better job taking care of their kids and raising them. You wouldn’t have a problem in this community if the parents knew where their kids were at and what they were doing at all times,” Malvin Haywood said. The Humboldt Police Department said no arrests have been made and that the vandalism is currently under investigation. “It makes me nervous because I have a racing heart. I’m really nervous about this,” Eppler said. “I’m getting scared and thinking like it ain’t safe here anymore.” When those responsible are eventually caught, residents suggest a punishment that sends a message to the community. “I think they need to clean it up and be forced to stand out here and hold a sign saying something with a good message on it,” Haywood said. Humboldt police ask anyone with information on the vandalism to call them at 731-784-1322.