TOONE, Tenn. — An afternoon explosion rocked part of West Tennessee, Tuesday. Investigators said the Chemring-Kilgore explosives plant in Toone was once again the source of the scare.

The small town of Toone is no stranger to explosions like this but residents said it shakes them up just the same. 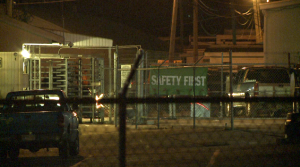 “I just heard a big ‘boom’ and I thought it was thunder,” Jeannette Fentress who has family that works at Kilgore said. “It’s hard to get used to it.”

Emergency crews investigated at Chemring-Kilgore throughout the night after the explosion.

“It was a small explosion and no one was injured,” Hardeman County Sheriff John Doolan said. “The building did what it was supposed to do and I can’t ask for anything better.”

Investigators said it happened around 4:30 p.m., causing minimal damage to a building. Dozens of first responders were on scene within minutes.

“We’ve drilled on that, so we know how to handle a situation like this now,” Hardeman County Mayor Jimmy Sain said. “Everyone did the right thing today.”

Kigore, which makes flares and other explosives for the military, has had its fair share of incidents, including one that killed an employee in 2014.

“My nephew’s wife got burned at Kilgore and I had a cousin that got killed there also,” Fentress said. “I don’t like anyone working there.”

With residents concerned about safety, officials said the plant has taken new measures to help prevent incidents like this.

“Kilgore went out of the way since the last explosion and put in some safety features,” Mayor Sain said. “They have video cameras in all the rooms and they have people monitoring those.”

Officials said there should be video of Tuesday’s incident, which should help investigators. The Bureau of Alcohol, Tobacco and Firearms will be on scene investigating the explosion to determine exactly what happened.

We reached out to Chemring-Kilgore’s media relations team for comment but our phone calls and emails have not yet been returned.