HUNTINGDON, Tenn. — A flash mob theft takes place this weekend as around 40 people entered a Huntingdon business just after midnight and stole merchandise before fleeing, and police say some of the suspects are affiliated with a Memphis gang.

“They just came in and started grabbing,” said Linda Kee, who said her sister was working inside when it happened. “It was scary. I didn’t know anything about it until the next morning when she text me.” 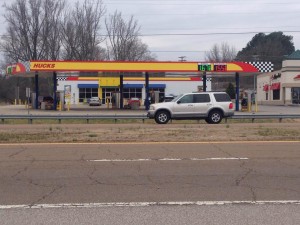 “It’s like some sort of binge crime or dare. There has to be some sort of group doing it,” concerned resident Randy Langston said.

Officers later learned some of the suspects are affiliated with a gang from Memphis and had been to a party at the National Guard Armory in McKenzie and were on their way back to Memphis when they stopped and converged on Hucks, according to Huntingdon Director of Public Safety Walter Smothers.

Officers responded to a call about the mob of people stealing merchandise at the store and saw a stream of cars leaving, according to Smothers.

They stopped some vehicles while others fled, and deputies used spike strips to stop one of the vehicles that left the scene.

Troopers with the Tennessee Highway Patrol trailed one of the vehicles fleeing toward Jackson on Highway 70 and later were joined in the pursuit by troopers in Madison County. An officer reportedly saw someone throw a gun from the vehicle around the 53 mile marker on Interstate 40.

Highway patrol units used spike strips and stopped the vehicle near the Wolfchase exit in Shelby County. The five people in the vehicle ran on foot, and three were taken into custody by troopers and Memphis police.

Those taken into custody by Huntingdon police were Franklin Henry Gill, 26, Christopher Mentel Robertson, 23, Braxton Alfred Stevinson, 19, and Jeromee Marshun White, 20. All have Memphis addresses, according to police.

“We were totally caught off guard. We’ve never had anything or experienced anything like that, and actually haven’t heard of this going on before. We weren’t aware these tactics were being deployed by gangs like this,” Smothers said.

The suspects arrested in Huntingdon are charged with theft under $500 and were jailed on $1,000 bonds.