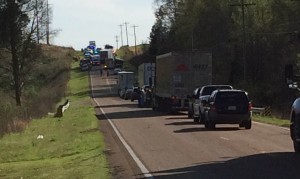 The two-vehicle crash took place just after 4 p.m. on Highway 18 near Naylor Road, according to Sgt. Chris Richardson with the Tennessee Highway Patrol.

A BMW and a Nissan Frontier were involved in the wreck.

There was one person in the BMW and two in the Nissan, and all were transported to a local hospital with injuries that were not life threatening, according to Sgt. Richardson.

The northbound BMW reportedly crossed the center line and struck the Nissan head-on.