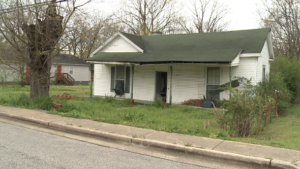 The deserted home is in the 500 block of North Bradford Street.

“Upon arrival, officers did look through the window and locate what appeared to be a black male lying on the floor,” Assistant Police Chief Kelvin Evans said.

Evans said a child in the neighborhood found the body Sunday afternoon.

“One juvenile found the body in the residence. At some point in time, the juvenile realized the body was deceased and told his friends, friends told parents, and they contacted local police,” Chief Evans said.

Officers weren’t able to make a positive ID because of decomposition. Right now, they say it’s too soon to determine how long the body was inside the home, but investigators do believe it was lying there for nearly a week.

Officers are still searching for answers as to why the man was inside and his identity. “We don’t know if this subject was living in this house or went in the house and then died in the house,” Chief Evans said.

If you have any knowledge of what happened, please contact the Brownsville Police Department at 731-772-7132. Investigators say the body was sent off for an autopsy, and results could take two to three weeks.