JACKSON, Tenn. — Two countries joined together to celebrate an artist from Germany, who found himself here at the birthplace of rockabilly. 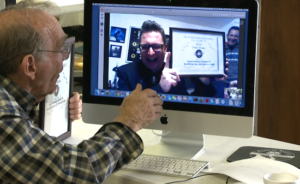 It was a historic moment at the International Rockabilly Hall of Fame, as music lovers inducted and honored the first international artist from thousands of miles away.

“He’s a tremendously exciting performer.” said Henry Harrison, the founder of the music hall. “His stage presence is magnificent and his movement reminiscing of the old days of rockabilly. It was exciting to watch him.”

Tom Toxic and his band came all the way from Germany to record music at the birthplace of rockabilly two months ago.

Today he was inducted into the hall, and saw it happen through Skype.

“There are so many artists in Germany who did much more than me for this honor,” he said. “But then Henry told me none of them ever played at the Rockabilly Hall of Fame.”

Harrison said the point of the induction was to prove two countries can be bonded together through the love of music.

“Music transcends language barriers, emotional barriers and we think it is one of the ways we can help achieve peace,” he said.

Toxic says this is a huge milestone for his band, and said he hopes to find himself back in Tennessee soon.

“I know there is one venue I can play at for sure, and it’s the Rockabilly Hall of Fame in Jackson, Tennessee.”

Tom Toxic and the Tennessee Tapes recorded at many different studios while here in February, even making a compilation of their music.

The owner of the rockabilly hall of fame said they will be inducting another international artist next month from Brazil.