OLIVE HILL, Tenn. — A long night of storms means a long day of cleanup for many in West Tennessee. 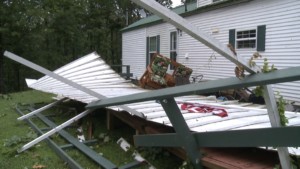 “We were just hoping that tree didn’t fall in on us,” Dustin Schubert said.

The National Weather Service says some of the damage likely came from an EF-1 tornado, which can have winds up to 110 mph.

Schubert was watching TV when he heard a bang.

“We went to the back door and heard something like a train coming, and we looked up and saw clouds forming a funnel,” he said.

The storm didn’t damage Schubert’s home, but it did damage his neighbors’ homes.

“That neighbor over there doesn’t have a roof to his house, and we don’t know what he’s going to be doing,” he said. 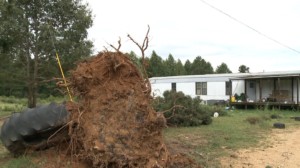 The wind was so strong it even blew a shed over on its side.

Many in the area believe a tornado caused the damage.

“I thought it was actually tearing the roof off my trailer, so I got in the bathtub,” John Barker said.

Barker moved into his trailer on Coy Hill Road two days ago. Now he is faced with cleaning his yard of broken tree limbs and debris.

“As you can see, we have trees on all around the trailer, but it did not touch it, so I’m pretty fortunate,” Barker said.

Even though many in the area are now tasked with cleanup, EMA Director Melvin Martin says it could have been a lot worse.

“Thankfully, nobody got hurt, but we’ve had quite a few trees and power lines down,” Martin said. “Now it’s up to the homeowners to finish the cleanup and get rid of the trees.”