TRENTON, Tenn. — The transition phase is complete in the Trenton Special School District after Director Sandra Harper announced she was stepping down in April. 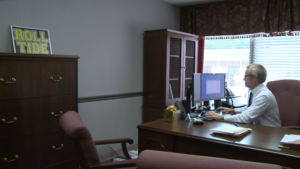 They may be a month into the 2017-18 school year, but Sept. 5 is officially Tim Haney’s first day as director of schools.

After 14 years as the principal at Trenton Peabody, Haney has moved to the central office after a monthslong transition.

“It allowed me to help Peabody get going and helped with their transition,” Haney said. “And it gave me time for Sandra to teach me some things and transition into this spot.”

Ricky Hooker takes over as principal at Peabody while Haney gets comfortable in his new office. So far, he says Trenton is in good shape.

“To be honest with you, there’s no urgent need for fixes at those places,” Haney said. “So I think I will take the attitude, ‘the transition will be made by me,’ until I see a need to make a change.”

One change he hasn’t quite had time for is decorating. Director Haney says although he hasn’t had an opportunity to clean out his Peabody office, it hasn’t stopped him from handling business at the central office.

“I need a desk and a computer, and then I’ll work on the aesthetics as we go along,” Haney said.

On the business side, Haney’s goal is to increase emphasis on the ACT in the district.

Haney made it clear what students, parents and teachers can expect from him as director.

“That is my best,” Haney said. “I promise to bring the same effort to this job that I did with every other job that I’ve been fortunate enough to have here.”

Even though Haney’s new office is outside of the classroom setting, somehow he still manages to coach 5th and 6th grade football three days a week.

Haney will cap off his first day as director at the Trenton School Board meeting Tuesday night.