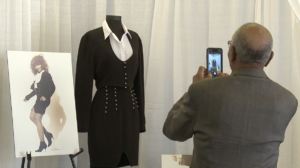 An outfit that belonged to Turner is being donated to the Tennessee State Museum, which is scheduled to open in Nashville in October of next year.

The outfit is now on display at the Tina Turner Museum in Brownsville.

Event representatives say Turner wore it at a photo shoot for her third solo world tour, “Foreign Affair,” back in 1990.

“I think this outfit is pretty much something that you don’t expect, because they’re used to the beaded and mini skirts and everything,” Rhonda Graam, Turner’s executive personal assistant, said. “It’s a little different, and probably some of them going to that museum, it may have been before their time.”

You have one more chance this weekend to see the outfit during Tina Turner Heritage Days at the West Tennessee Delta Heritage Center before it goes to Nashville.