JACKSON, Tenn. — John Netland will officially take over as provost at Union University later this month. 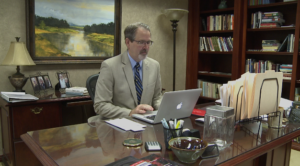 “I’ve really come to have a passion for not only our university, Union, but for higher education in general,” he said.

Netland grew up in Japan, where his parents served as missionaries. He earned degrees in Southern California and then taught in Michigan for 19 years.

Netland took over as chairman of the English department at Union in 2008, right after a tornado tore through campus. “I saw some remarkable things on campus and I saw the way in which God had moved within this campus to rebound from a very devastating event,” he said.

Netland became dean of Union’s College of Arts and Sciences in 2013. He said he wants to look at new programs in the new position as provost. “I’m hoping that through this new position I can lead us to continue to do what we do well and to explore ways in which we can get even better,” he said.

Netland said people make Union special. “I’ve lived in a lot of different places and West Tennessee just feels like home to me,” he said.