JACKSON, Tenn. — Chances are if you’ve lived in Jackson for the last several years, you’ve heard of the missing case of Bethany Markowski. 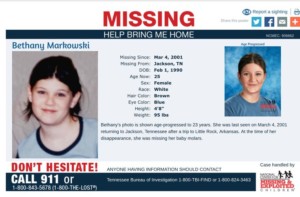 Bethany Markowski vanished without a trace at 11-years-old and she would be 28 today if she is still alive. The last person she was seen with was her father, Larry Markowski. WBBJ 7 Eyewitness news first spoke with him in 2001.

“We took a nap in the van. She wanted to go up in the mall. She went up supposedly and I fell asleep a while and woke up to look for her. I made a mistake by letting her go in the mall. I shouldn’t have done that,” said Markowski.

Friday, a reporter from Crime Watch Daily interviewed Larry Markowski on camera for the first time since 2001.

“I picked her up on Friday. We went to Arkansas and the whole time we was there we visited and everything else. Then we went to my house in Gleason. Well, she wanted to go to the mall in Jackson to go to Claire’s and the game room, so we go to mall at 1:30 or 2 o’clock. So, I stretched out on the back seat of the van. It was not about 30 minutes later, I went in and I couldn’t find her. I went in the mall. I looked everywhere,” said Markowski.

Mall security cameras show zero evidence that Bethany was ever inside the mall.

“They got a podcast going that says I’m a mean villain of a human being,” said Markowski.

A podcast called “Searching for Ghosts” outlines the events leading up to Bethany’s disappearance.

In the podcast, Larry’s friend Harold speaks out. Harold says, “He said to me, ‘well m going to take my van down to port of Mexico and you can have it, you just come and get it.
It’d be yours.'”

“I’m a truck driver. I drove all 48 states and Canada. If I was going to go to Mexico, wouldn’t I have left Little Rock and gone to Mexico? And I dang sure wouldn’t have called my so-called buddy Harold to come and get the van,” said Markowski. “Nothing was ever said like that. It’s a witch hunt and pack of lies. I believe somebody has her and she’s going to come home
just like Jaycee Dugart. I don’t care how they smear me. All I care about is my daughter. I love my daughter will all my heart,” said Larry Markowski.

The case still remains unsolved. The TBI has not ruled out that Bethany was abducted by a stranger and no charges have been filed against Larry Markowski.

If you have any information, call the TBI at 1-800-TBI-FIND.