JACKSON, Tenn. — A new sound is echoing through Conger Park. It’s the sound of Pickleball! 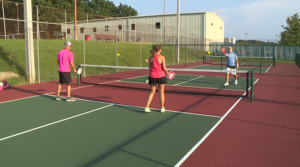 Pickleball was invented in 1965 and has only grown over the past five decades.

Brad Tursky is a local pro and says it’s an easy sport to figure out.

“It’s not like a lot of other sports where it takes some time to be competitive. People can come out day one and have fun with our group,” Turksy said.

Mark Coffman has been playing for over a year and says there isn’t an age limit.

“You can play at any age. We’ve got teenagers playing, and we’ve got folks in their 70s playing,” Coffman said.

The name might be a little confusing, especially since no pickles are used.

During open play at Conger Park Thursday night, players let WBBJ 7 Eyewitness News reporter Josh Robinson step onto the court and show off his skills. Check out the video accompanying this article to see how he fared.

“The social aspect is the best part, because you’re so much closer together than tennis that you intermingle a lot more and laugh a lot more than you do with other sports,” Tursky said. 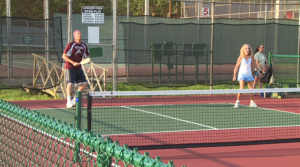 Open play for pickleball at Conger Park is every Sunday, Tuesday and Thursday night starting at 6:30 p.m. and Saturday mornings at 8 a.m.

Click here for more information about the USA Pickleball Association.

For how to get involved with pickleball in Jackson, visit the Jackson Pickleball Association Facebook page.