Horde of malnourished cats seized from a property in Savannah

SAVANNAH, Tenn. — Over 100 cats, that’s how many Hardin County Animal Services representative say were living on a property in Savannah. 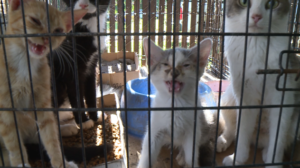 “They’re up on your porch. They’re climbing on your cars. They’re in your cars if you leave the window down,” described neighbor Angie Martin.

Martin says living near a house on Plainview Drive in Savannah for 20 years, has been difficult. The conditions preventing her from even walking around the block.

“And I’ve not been able to do that the last year or so, because of the smell and all the bacteria and germs out here,” Martin said, “so yeah, it’s been a real, real headache.”

This is why she says she’s glad to see something finally being done about it. The police department says they responded to call of animal cruelty Saturday around 3:30 p.m. 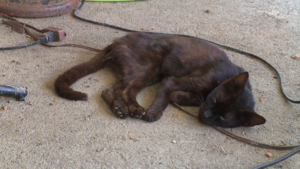 “Some of the cats were very malnourished. Some of them were living in their own feces. You could tell that they just haven’t been taken care of,” said Sgt. Jeremy Bowen of the Savannah Police Department.

Hardin County Animal Services was on scene assessing the situation. They say they found about 50 cats in cages outside and expect there to be about 100 more cats on the property; many, they say, on the brink of death.

“Their hair is falling off of them. There was one, it looks like maybe, its throat’s been cut or it’s been injured around its throat,” said Martin. “There’s several of them that are just barely walking around.”

Officials on scene began crating cats for the vet that, they say, needed immediate medical attention. 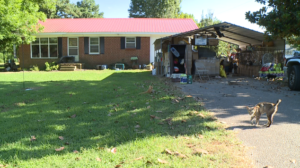 The son of the homeowner, who did not want to be on camera, said his mom was running a nonprofit cat rescue out of her house and just got overwhelmed, resulting in this overpopulation. He also says that she recently acquired more cats from a neighbor who moved away just several days ago.

The police department says the owner of the house could be facing felony animal cruelty charges. They say the investigation is still ongoing.