JACKSON, Tenn. — Police arrest three people accused of identity theft. Investigators said they found the group at a Jackson motel with more than $70,000 in cash. 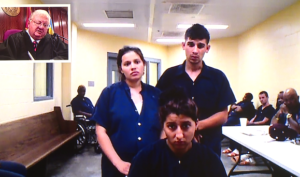 Police said a First Tennessee Bank employee caught a man and woman using multiple credit cards Sunday to get cash at their ATMs in Jackson.

“The two suspects fled on foot when officer attempted to detain them,” Jackson City Court Judge Blake Anderson read from an affidavit.

Police said they found the trio Sunday at the Red Roof Inn on North Highland Avenue. Investigators said they found more than 200 credit cards, credit card skimming devices, ATM parts and components, a credit card encoder, a laptop and $70,924 in cash inside their motel room, according to court documents.

Jackson police said the suspects are all from Romania. “How long have you been in Jackson?” Anderson asked. “Like two to three days,” Serban responded.

Police said this is a joint investigation with the U.S. Secret Service that spans multiple jurisdictions. Police said Immigration and Customs Enforcement is also involved.

Officers said they are trying to determine the number of victims and where they are from.

First Tennessee Bank released the following statement: “We are cooperating with law enforcement following incidents of unauthorized ATM transactions in Jackson. We encourage customers to review their accounts carefully and to report any suspicious activity by calling our Card Claims Center at 877-242-9895.”

Hundreds turn out for Festival of the Lakes