Monument dedicated in honor of lives lost in 1952 tornado

HENDERSON, Tenn. — Members of the Chester County community come together to honor the more than 20 lives lost in a tornado. 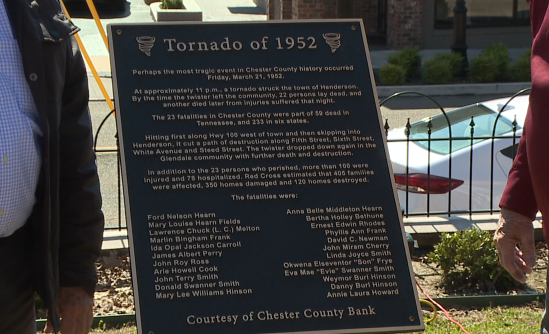 Families came together to remember those who lost loved ones in a deadly tornado in 1952.

Bobby Hysmith is one of the survivors.

“I was in the tornado. I had my mother and father, my brother and my sister. When the tornado hit, we were in the house, and my dad knew what was coming,” Hysmith said. “We got in the bedroom, and he pulled a mattress over us and that probably saved our life. It blew our house, picked up our house off the ground and carried it about two hundred yards.”

The 1952 tornado was an EF-4 that killed 23 people and left many injured and homeless.

Hysmith says the purpose of the memorial is to bring the families together, but it also exists to make others aware of the tragic event.

“They can understand this devastation it can be and the need to take shelter when they hear the sirens, and try to be able to save a life and save other peoples life,” Hysmith said.

Two of Neal Smith’s family members died in the storm.

“Most of everybody in the county has somebody involved,” Smith said. “My uncle, Terry Smith, and Don were killed in the same family.”

The monument is dedicated to all the families who lost their lives in the tornado that struck Henderson in 1952. Those gathered bowed their heads and prayed in remembrance.

“Today, there are people in our audience who lost their father, lost their mother, a sibling,” said Tony Hysmith, son of Bobby Smith. “One particular lady here lost her father, mother, brother, and I am glad she is here along with others. We wanted to have a permanent marker here to remind people of what happened to Chester County in March of 1952.”

Dozens of community members gathered in font of the Chester County courthouse for the unveiling.