According to the Centers for Disease Control, STD cases have continued to rise from 2013 to 2017. The CDC reported a rise for the most common types of STDs, which include chlamydia, gonorrhea and syphilis, especially in the 15 to 24 age group nationally. 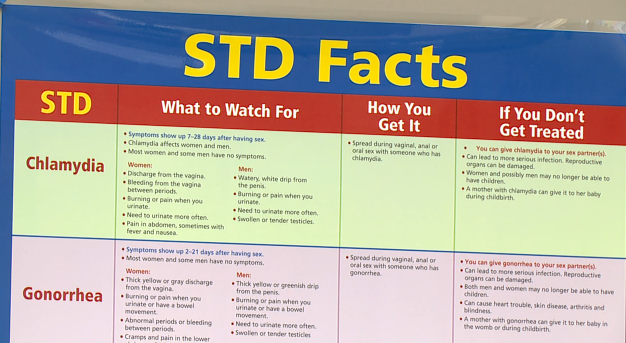 “We want to see a drop in what we see, but the only way we’re going to get that is people coming in to be tested,” said Janice Brown, public health representative for the Jackson-Madison County Regional Health Department.

For many West Tennessee communities, STD rates have continued to rise each year, with Madison County being one of the top counties in the state with relatively high STD rates. According to the Tennessee Department of Health, Madison County reported 311 cases of gonorrhea, 20 cases of syphilis and about 725 cases of chlamydia in 2017.

“Each disease has its own symptoms,” Brown said. “Gonorrhea and chlamydia are more like sisters and brother in that they would have similar symptoms like a discharge, burning, tingling, lower abdominal pain.”

Brown says health department staff are there to help patients feel comfortable during testing and want to educate the public to help those infection rates drop.

She says the best thing to do if you suspect you have an STD is refrain from being sexually active until you can be tested.

If you are sexually active, health experts urge for frequent testing. To find the closest clinic in your community and for more STD information, visit the Seen on 7 section of our website.