HUNTINGDON, Tenn. — Carroll County residents met with Congressman David Kustoff Friday morning to learn more about what he is doing in Washington. 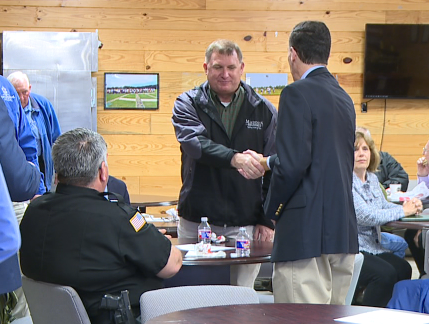 The top concern was the Mueller report.

“People were so concerned, and there were people who were convinced that the Trump campaign had colluded with Russia. The findings of this very thorough report were no collusion,” Congressman Kustoff said.

He also discussed his bill, the TRACED Act, which was introduced in March.

The bill would allow investigators more time to catch phone scammers, and place a $10,000 fine on each robocall.

“This year, in 2019, the experts estimate that 45 percent of the calls that we get are going to be robocalls,” Congressman Kustoff said. “It’s made to look like it’s coming from our community and our neighborhood, and sometimes our families.”

He also says that it’s a safety and security issue.

“If you fall prey and you answer the call and it’s a telemarketer who purports to be from the IRS and says I need blank amount of money or I’m going to send an agent out to come and arrest you,” Congressman Kustoff said.

He also discussed the Green New Deal, which would monitor industry and carbon emissions.

“When you consider to implement the Green New Deal as it’s proposed now, over 10 years it would cost $93 trillion,” Congressman Kustoff said. “We can’t afford it.”

This is the third year Congressman Kustoff has participated in the Good Friday Legislative Update with the Carroll County Chamber.